The Immigrant is You

You Get The Money > BLOG > Others > The Immigrant is You 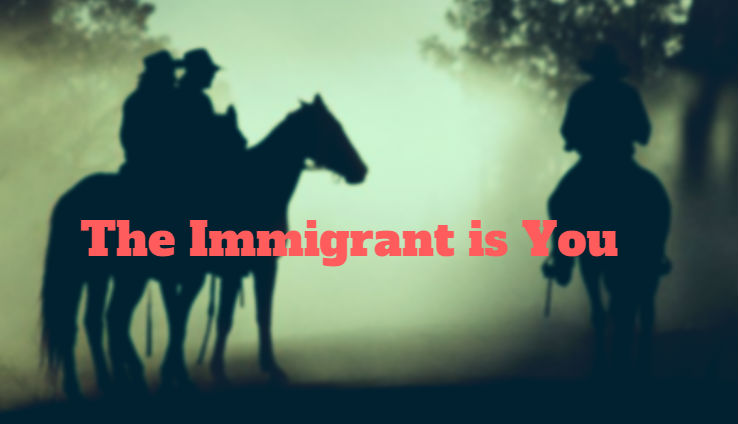 Immigrant, The Immigrant is You, You

The Immigrant is You

The immigrant is you. You Are an Immigrant. Everyone is or was an immigrant to this country, at some point in time.

I checked out the ancestry of several well-known people. There could have been more and these are just a few of the many I researched.

Farage is a politician who promoted Brexit on the basis of immigration problems. Farage was born in Kent, England of Guy Justus Oscar Farage. The name “Farage” comes from a Huguenot ancestor and one of his great grandfathers was born to German parents who were immigrants to England in the 1800s. Huguenots came from a part of France in the 16th Century which was very Protestant. So he has French and German ancestry.

David Cameron is a recent Prime Minister of the UK. Predominantly Scottish as his name would indicate. Emile Levita was a German Jewish Financier and was David’s great-great-grandfather. Levita became a British citizen in 1871, descended from George II nd who was brought up in Northern Germany.

Our current Queen is a descendant of many British Royals; from the House of Stuart, Mary Queen of Scots Welsh and Irish Royal families and back to the House of Wessex in the 7th Century. Through her great-great-grandmother, Queen Victoria, she is related to most of the European Royal houses. She is also related to the Danish Royal house and the house of Schleswig-Holstein-Sonderborg-Glucksburg from the North of Germany.

Boris Johnson is a conservative politician who promoted Brexit on the basis of immigration and the cost of supporting immigrants. Boris’ grandmother known to him as “Granny Butter” had the name de Pfeffel was a descendant of Paul Von Wurtternberg, a German Prince descended from George II nd. George the second was born in Hanover in Germany.

It would seem that few people are 100% English or even British.

So perhaps we can go back in history to some important dates and find out who was really English or British.

William was a Norman French.

King Harald who lost the battle of Hastings was descended from King Cnut who was a descendant of King Sweyn of Denmark.

Who are the English?

If we go back to the roman invasion in Britain around AD43, the country was inhabited by “Celts.” “Celts” is a collective term for several tribes from Europe. These “Celts” migrated from Europe to Britain around 700 B.C.

The first people to be considered English were Anglo Saxons, a group of closely associated Germanic tribes which migrated from Germany and southern Denmark in the 5th Century. This followed the withdrawal of the Romans from Britain.

In Britain we have constantly shared our Genes with French, German and Scandinavian ancestors. This means it is quite difficult to define what “English” means.

For over 300 years England was a dominant force of trade and colonisation in the world. This meant trade and immigration. English people emigrated abroad and foreigners immigrated to Britain. Mixed race marriages were common and so of course were mixed race children.

No More Slaves and No more Colonies

Although the Empire has shrunk and England has few colonies, there have been periods in history when a shortage of labour has necessitated encouraged immigration.

After WW2 England was short of young men, short of housing and roads. We encouraged West Indians, Indians and Pakistanis to come and work in England. 100s of thousands came. We had influxes of Europeans from Poland, Hungary and other communist countries.

In the 1950s and 60s large numbers of Irish crossed the Irish Sea to work on our roads and buildings. The M1 was probably built by the Irish.

Most Western Europeans have done the same over the centuries. Immigration has supplied the work-force necessary to rebuild this country.

Do we Need More Immigrants Now?

If we look at how a business is built up. There are resources going into it and products and services coming out. One of the resources is people. People are needed to run most businesses. You may have the best product in the world but if there is no-one to make it, it cannot be sold.

I do not know if “Business Britain” needs more labour now. I do know that an enormous number of “immigrants” fulfil important roles in our society.

How long does an “immigrant” have to live in a country to regard themselves as a citizen of that country? I have asked hundreds of immigrants: “Are your children, born in the UK, citizens of the U?”

“Will their children be citizens of the UK?”

The Language Tells You

The language we speak is a melting pot of the last 2000 years. From Celtic dialects through Latin and Anglo Saxon to international influences from all over the world during our Empire days, there is no one major source of our beautiful language.

There are over a million words in the full English dictionary. There are more than 10 major versions of English spoken in the world. It is only surpassed by Mandarin Chinese in its influence.

So Who are Immigrants?

We talk about 1st and 2nd generation immigrants but the children who are born and brought up here are likely to feel more British than migrant.

It is good that we have an identity and that that identity includes where we were born and what language we speak.

The reality is: we are all immigrants since all of us are a generation multiple away from an ancestor who came from another country. 1st, 2nd, 3rd, 4th, 5th, 5th…..generation.

We are all Europeans with a taste of Asia, India and the W. Indies; a smattering of Oriental, African and Polynesian.

Personally, it makes me feel like a member of the human race, then a European and then English.

You are an immigrant. Welcome to this wonderful world.