Is Bob Dylan Dead or Alive 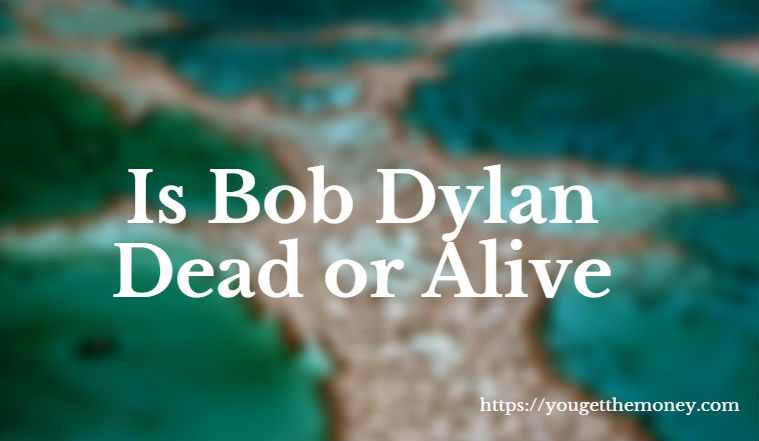 Is Bob Dylan Dead or Alive

Bob Dylan is a Nobel Prize for Poetry winner 2016. Grew out of Greenwich Village into the protest folk music of the 1960’s

He was there with Martin Luther King and sang on that day to the crowd at a time when the USA and the world were changing. He wrote about that.

There is plenty of information about his life, bibliography, discography etc on the net.

Understanding the man and what has driven him is like dancing with your shadow.

He recorded songs he had just learned to avoid giving away his good stuff, the ones he had written himself, but later found some peace in creating original music on record. Live performances were often different or adapted from the recorded ones.

He was so prolific he wrote complete songs in a night.

He claimed he had no past he could remember, he always lived in the “now.”

He had an eloquence that others yearned for and could express other people’s feelings and attitudes.

“In the now” means he changed with the times and many of his “fans” became disenchanted. They wanted the same old song with the same old melody. Rocking things up with a band was “sacrilege” to some.

No background, just influences, he was a human sponge, soaking up the times and telling us about them. Retelling the stories we knew but underpinning them with the feelings we had.

What Does it Mean

When asked what a song meant, he would say listen to the song, it’s just a song and you can put your own meaning on the song.

Sometimes called a genius, a preacher, a protest singer and a poet, he was a mirror to the world he experienced and he created the musical poetry to tell about it.

You decide what it means to you when you really listen and if the song says nothing, there are a lot more to listen to.

When he went electric he was often booed by the audience. The folkies felt he had betrayed them. He was doing what he had always done, he was moving into new experiences to absorb and reflect new inspirations.

Bob could remember a song after he had only heard it once or twice. He could remember the words and melody and recreate it quickly. He would then often stamp his own style and interpret the words differently.

Dylan is astute and knows what he wants and knows that he cannot stand still. He must keep moving to keep his artistic senses fed.

Many times he adapts his own songs when singing live, changing rhythms, chords and even the words. He wants to connect with the audience.

No Politics, I’m Moving On

Not interested in politics. Just poetised what he could perceive around him.

He is and was very secretive, especially about his female partners and is rumoured to have been married 5 times. He has at least 6 children from different relationships. He is very protective about his extended family.

He wanted to be on the side of people who were struggling for something and not out of political leanings. He wanted to change the world and his only weapon is his poetry.

Short relationship with Joan Baez in his early years. This may have been longer but in Dylan’s own words they both wanted to control each other and that would never work.

He would often say that he did not know where his songs came from; maybe someone else can tell him.

In the early days he was working out his feelings into songs, constantly writing and then typing them out.

He lived and survived the McCarthy years.

Through Newport 1963 with Johny Cash, Howlin Wolf and other greats his styles changed and the subjects under the Dylan microscope moved with the times.

Sometimes he wrote a story that had affected many people in graphic poetic words that spoke from deep in the soul.

Not Many people in the 60s wrote and sang their own songs, he did. Many other artists “covered” his songs, including Baez. Many of them became hits and this helped to promote and publicise Dylan.

Many of his songs are infected with humour, often ironic. (Try Bob Dylan’s Dream.)

He can create images in his sounds and his poetry and articulated what we all wanted to say, but found impossible to put into words

Hearing a Dylan song can cause you to think: “That is what I meant to say. I just couldn’t find the words.”

Several songs have become iconic.. Blowing in the Wind / Masters of War.

Dylan, the poet wrapped in his own cocoon of mystery and legend, seems impossible to pin down. That is how he seems to want things and so he avoids the labelling and paralysing effect of stardom. He would struggle to move on and renew his focus without being on the move and quick as quicksilver.

That he is a genius and has created iconic songs and poetry that will last for ages.

His accident on his motorbike broke some vertebrae and affected his health for a long time, but much of the consequences are shrouded in mystery and rumour.

Songs come to Dylan and he claims himself that he struggles writing to order. He has to “get the song out” then and there. Reminiscent of Leonard Cohen, he is highly focussed and extremely intense while capturing the song and getting onto paper.

His energy and drive are not what they used to be although he is still very secretive and controlling.

Genius is a strong word for a folk singer so I would not put Dylan in a box at all. His genius of speaking the words we cannot find are not what he chooses. His intensity when writing a new song has to be satisfied and finished with quickly. Then the song is done.

Describing Dylan is like shadowboxing mercury. He will slip and slide away from being pinned down and labelled. That is who he is and what he wants and part of his genius.