Is Hypnosis Really Magic? Can It Make You Rich?

You Get The Money > BLOG > you get the money > Is Hypnosis Really Magic? Can It Make You Rich? 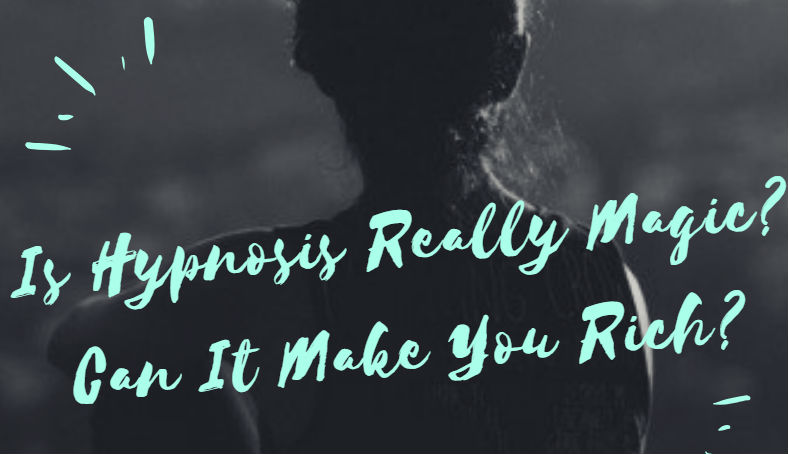 you get the money

Is Hypnosis Really Magic? Can It Make You Rich?

In a trance you can believe you are a chicken.

Under Hypnosis you can lift cars.

In a trance you can regress back to childhood and be a baby again.

Well yes and no.

Can Hypnosis help you to make money? Yes, for most people it can help you enormously.

I Do Not Want to be a Chicken

I am a Hypnotherapist and a qualified Stage Hypnotist and there is a big difference.

If we look at what really happens in a Hypnosis stage show, the reality is very different from how a Hypnotherapist works.

The Secret of the Chickens

Stage Hypnosis is 80% stage and only 20% hypnosis.

A stage hypnotist has an audience who go for fun. The want to see people make a fool of themselves or they want to know “Can I be Hypnotised.” It is a very similar to a bunch of friends on a Stag night or hen night all going to the pub to have a good time.

The Audience Want to be Hypnotised

This makes it easier for the Hypnotist, but not always. He still has work to do to find a group of people who are susceptible to suggestion and want to have some fun, let their hair down and do something silly or outrageous.

If you have been to a stage show you will probably recognise this. Now look at it from the hypnotist’s point of view. He can see a number of people with their hands in the air, apparently “stuck.” He asks anyone who has separated them to sit down.

His potential “subjects” are the people who are standing with their hands above their heads. He asks them to put their hands in front of them and come up on to the stage.

A famous story among stage hypnotists is the Manchester Hypnotist who had an audience of over 1000 people and when he asked people to press their hands together and stand up – nobody did. His chauffeur sneaked off the stage – sat in a seat and raised his hands. The hypnotist did the whole show with just one person; brave man.

In 2003 Zig Zag produced a TV show for channel 4 about Stage Hypnosis. They followed a weekend training course and the final show we put on, on the Sunday night. I was one of the trained hypnotists.

The Trainer was Philip Holt. If you want a good description of what Stage Hypnosis is, see his website.

I Do Not Want To Be Hypnotised

“Easy Peezy,” you are one of the people sitting down. You cannot be hypnotised against your will.

You can be persuaded to do things. It happens every day. Advertising is a form of persuasion. “BOGOF” is persuasion. (Buy One, Get One Free.)

If you want to know how you can persuade and be persuaded, see this book.

You cannot be made to do anything against your deep principles under hypnosis. In trance you are in more control than out of it.

My initial training in hypnosis meant 50 hours of hypnotising and being hypnotised. (You do get tired after 10 hours of going in and out of trance, by the way.) I quickly found that everyone had different experiences and that a few things were common to us all. We all felt very much in control and all enjoyed the state. (Sometimes we did not want to come out of the trance when we were instructed to do so.)

Only in the way dinner fork is dangerous. Eat your dinner with it; it is safe. Stick the fork in your eye; it is dangerous.

Anything that is misused is potentially harming or uncomfortable.

If you do any of the following things in your life, you can answer that question yourself:

Drive a car or a bike.

Watch television or see a film.

Read a book or magazine or newspaper undisturbed for more than 10 minutes.

In all these things, whilst you are doing them, you are in a trance. Sometimes it is a light trance, sometimes a deep one, (an exciting film.)

No, Hypnosis is not evil; it is in fact a natural state to be in at certain times.

You cannot be turned into something you are not or made to do something that you would not have done if you were, for example, drunk at a party.

All Hypnosis is self-hypnosis.

We do it to ourselves all the time. A Hypnotherapist simply helps a client to put themselves into a trance and directs them into a healing process.

When I did my own Hypnotherapy training, I was taught that the best healer and the best doctor and the best therapist is the one who knows you the best. It is you.

Good Hypnotherapy helps the client to heal themselves.

I once worked with a senior psychotherapist who was in charge of 5 other therapists. His personal problem was that he could not remember anything before the age of 8. I put him in a trance and regressed him gently back to a birthday party, his 5th, (his choice.) He began to weep when I asked him who he could see in the room with him. He said no-one was there and began to weep. (I use that term deliberately.)

He found himself alone and looking for his father. I brought him gently out of the trance and after a few minutes to collect his feelings, he admitted to me that he was a total skeptic, regarding hypnosis, before and explained about all the therapy he had been over the years to help him remember what had happened in his childhood.

What Use is it?

I have mentioned the self-healing possible.

Our physical body functions slow down and begin functioning naturally.

Hormones which cause stress reduce and other hormones that make us feel better are released, by our own brain.

No, it is not the same. It is possible to use self-hypnosis to encourage and activate sleep. Click this Link.

Will We Wake up?

Do You Use it?

I use a light hypnotic trance to write articles and books. I always wake up.

I use self-hypnosis to help solve problems. The solutions just seem to come floating out of the blue.

My current challenge is to find a way to earn money from home. I like to be in charge of my life and work for myself. (I do not like taking orders from others.)

I want to retire with a pension that increases year in year out.

Check this out if you have a similar desire:

And let me know what you think of it.

I hope you find this helpful and that I have dispelled some of the myths of hypnosis and trance.

Is Hypnosis really magic? No

Can it make you rich? No, but it can help.

Read More: How to Build Your First Affiliate Website